People’s COVID-19 Mitigation Efforts have Increased in Germany, but so too has Frustration with the Government

Researchers at the Institute for Psychological Research at the SFU Berlin have conducted a comparative analysis of two surveys (November/December 2020 and March 2021) in the context of the BMBF-funded Viral Communication project. The results reveal changing attitudes and behaviours as the German public responds to the ongoing COVID-19 pandemic:

Most COVID-19 measures were seen as effective rather than ineffective, although this perceived effectiveness has mostly either declined or remained equal since November/December 2020. The largest difference was observed for ‘Using the Corona-Warn-App’ with a substantial increase of people viewing it as completely ineffective (22% to 39%). 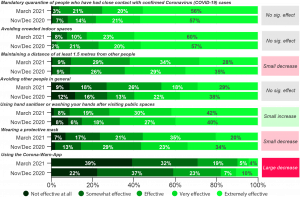 Despite these observations, there was a general self-reported tendency to follow voluntary COVID-19 measures more frequently in March 2021 than in late 2020. This applied especially to ‘Avoiding crowded indoor spaces’, where the proportion of people in Germany who indicated to ‘Always’ do this increased greatly (32% to 58%). 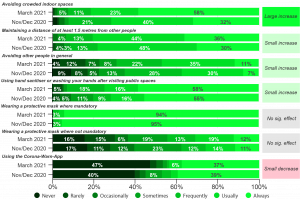 Public Concerns & Frustrations as the Pandemic Wears on

People in Germany were slightly less concerned about their own financial situation in March 2021 than at the end of 2020 (44% to 34%). However, the fear of infecting others with the Coronavirus turned out to be somewhat higher (63% to 72%). People also agreed to a much higher degree than before that ‘The Corona regulations anger [them]’ (‘Neutral’ – ‘Strongly agree’: 34% to 60%), indicating that the population in Germany is increasingly frustrated with how the situation is being handled. The most recent ZDF Politbarometer has also found that a majority (36%) is in favour of stricter regulations. ‘Getting back to normal’ as opposed to ‘Protecting people from danger’ was perceived as more important in March 2021 compared to the end of 2020 (28% to 35%), emphasising that people are in favour of stricter regulations which it is hoped will bring a  faster return to normality.

This frustration is complemented by significant drops in trust in government actors. Public distrust increased for the Health Ministry (68% to 52%), the state government (64% to 53%), and to a large degree, health minister Jens Spahn (63% to 37%) and chancellor Angela Merkel (76% to 64%). The Robert Koch Institute as a government agency has also somewhat gained public distrust (16% to 23%). 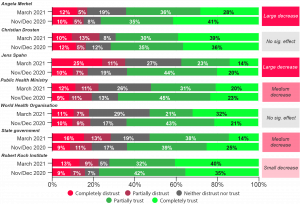 Coherent with the German public’s frustration about the situation, more hope is being set on vaccination. Compared to November/December 2020, mandatory vaccination was supported more in March 2021 (48% to 55%). A particularly large increase was observed when it came to people’s willingness to voluntarily vaccinate against COVID-19 (61% to 76%).

Vaccine Willingness Dependent on whether People are Aware of Vaccine Origin 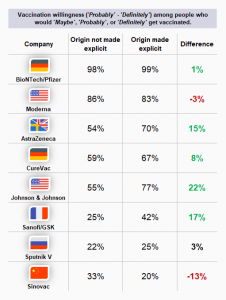 The highest vaccine willingness was observed for BioNTech/Pfizer (98%) and Moderna (86%). Among the currently used vaccines, AstraZeneca scored the lowest with just 54% willing to receive the vaccine. This contrast between the high-ranking vaccines and AstraZeneca hints at a potentially shifted conversation from “should I vaccinate?” towards “which vaccine?”.

An experimental setting in the last survey (before the temporary stop and re-evaluation of the AstraZeneca vaccine) allowed for insights into whether mentioning a vaccine’s national origin had an influence on vaccine willingness. Indeed, all COVID-19 vaccines except Sputnik V exhibited a significant difference in willingness to vaccinate when national origin was made explicit, compared to the control group which was not shown the national origin.

Vaccine willingness was plateaued at 99% (increase by 1%) when national origin was made explicit as ‘Germany’ for BioNTech/Pfizer; it was lower by 3% for Moderna when highlighted as coming from the United States, while it was considerably higher for Johnson & Johnson by 22%. Curevac received an 8% increase with ‘Germany’ indicated, and the willingness to vaccinate with AstraZeneca was higher by 15%. On the other hand, Sinovac received a decrease in vaccination willingness by 13% when ‘China’ was indicated.

As part of the Viral Communication project, two national surveys were conducted in Germany from 31 October to 14 December 2020 and 2 March 2021 to 22 March 2021, respectively. The primary survey employed stratified random postal sampling so as to accurately represent the German population aged 16 and above. Respondents were able to opt in to participate in future surveys. The total number of respondents who participated in both surveys was N = 402. The cases were weighted according to key socio-demographic distributions as of the last German census.